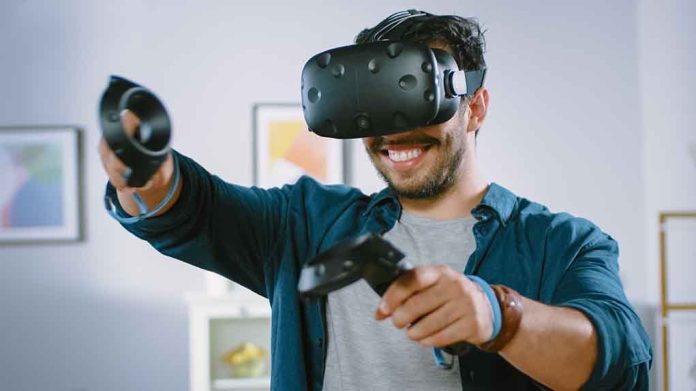 (USNewsBreak.com) – Palmer Luckey, the founder of Anduril and co-founder of Oculus, announced on November 6 that he’d created a virtual reality headset designed to kill the person using it if their game character died. He built the device to honor “Sword Art Online,” a Japanese novel and television series in which people play a virtual game they cannot leave until they complete and lose their lives if they fail. Luckey admitted his invention is not a working model, but he has perfected at least half of the technology.

“You instantly raise the stakes to the maximum level and force people to fundamentally rethink how they interact with the virtual world and the players inside it,”https://t.co/OH0dWP7ZDd

The headset, called “NerveGear” in the SAO series, uses explosive charge modules to target the user’s brain. Luckey explained he’s figured out the killing part of the device but hasn’t worked out how to make it usable in a game scenario. He also stated the technology is far from failsafe, which is why he has never personally tested it.

"This might be a game, but it is not something you play."

To commemorate the Sword Art Online Incident of November 6th 2022, I made the OQPNVG, the first virtual reality device capable of killing the user – if you die in the game, you die in real life.https://t.co/F3nkP5EU61

The inventor divulged that real-life consequences of gaming have always been an interest of his. Nobody had yet looked into it, which drove him to try his hand at creating a NerveGear-like headset. Despite his excitement about his success with the creation, Luckey stated it is currently only office décor. But he also warned his device is just the beginning, and he suspects other innovators will develop similar items in the future.