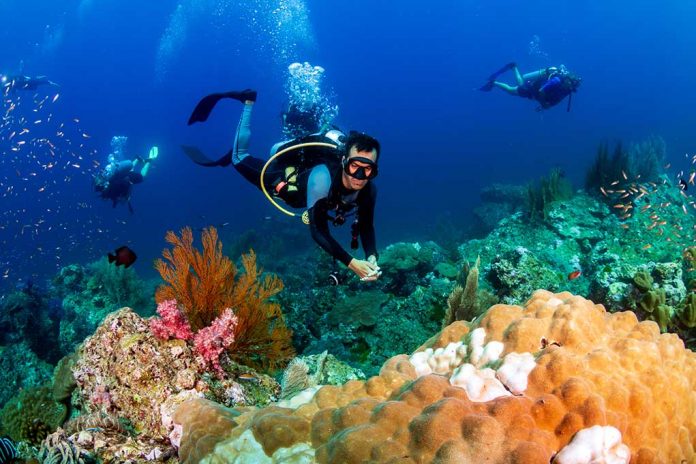 (USNewsBreak.com) – The oceans are one of the only unexplored areas left on Earth. There’s so much we don’t yet know about the deeply complex aquatic worlds that lie beneath the waves, especially at its deepest points. Yet one recent discovery highlights just how quickly we’re exploring this untouched underwater wilderness, too.

The National Oceanic and Atmospheric Administration (NOAA) is currently on a month-long expedition to explore the Atlantic. The vessel, Okeanos Explorer, set out the last week of July 2021, on the North Atlantic Stepping Stones projects to collect information about the deep waters off the eastern US coast.

While working to map the ocean floor and explore the ecosystems existing there, scientists monitoring the vessel spotted something absorbent, yellow and porous that caught their eye. What they found closely resembled two beloved characters from the well-known kid’s cartoon, Spongebob Squarepants.

A SpongeBob doppelganger was hanging out right beside a pink starfish, who just happened to suspiciously resemble Patrick Star. Sadly, researchers did not report finding a matching pineapple in the same area.

A Research Vessel Found SpongeBob Look-Alikes A Mile Under The Ocean's Surface https://t.co/tuKQONeBXd

The nautical nonsense soon made its rounds online due to a tweet by scientist and starfish expert, Christopher Mah, who was watching the expedition.

According to Mah, the buddy relationship between Patrick and SpongeBob wouldn’t really happen in nature. Sponges are a food source for starfish, so the scientist suspects the captured moment was a prelude to the starfish having a nice meal. However, he did offer some hope: the bright yellow coloring could be a chemical defense, which would turn the starfish away.

Mah is also quite excited about the incident going viral. He wants more attention on the ocean and its inhabitants. The discovery of the famous sponge and his sidekick will only help to get people thinking and talking about what is going on down in the watery depths.