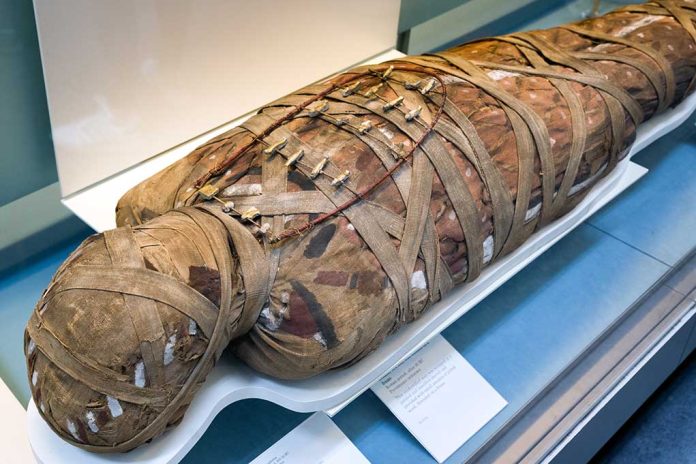 (USNewsBreak.com) – Curses may seem like the fodder of storytellers, and people often do not believe in them. Yet, there are some situations that can make even the most skeptical person wonder if they could be real. Media outlet Ripley’s recently reported on one such situation.

The Discovery of the Iceman

In 1991, some hikers found Ötzi or the Iceman in the Ötztal Alps of northern Italy. The perfectly preserved specimen wore goatskin leggings, a woven cloak of grass, and a bearskin hat. His bow and arrow, knife, skinning tool, and ax sat nearby.

Researchers discovered he died from an arrow shot to the back about 5,300 years ago. According to reports, they put together that he was a 30 to 45-year-old hunter who likely stood 5 feet 3 inches tall.

He quickly became fascinating for people to study as one of the best mummies in existence. Researchers, scientists, and archeologists flocked to learn more about him and be one of the lucky few who got to study him.

Their inquisitions soon led to fear for some as odd deaths started occurring among those who had close contact with the Iceman. Some believe he carries a curse with him that kills those who get too close.

Then Came the Deaths

The first assumed victim was Rainer Henn, who ran the forensic team. He used his bare hands to put the frozen specimen into a body bag, and later died in a car accident while traveling to give a lecture about the Iceman.

Kurt Fritz, an experienced mountaineer who helped lead the team to Ötzi, was next to suffer a bizarre fate. He died in an avalanche.

Rainer Hoelzl, the journalist who filmed the body’s removal, was the next to end up dead. He died of a brain tumor shortly after releasing a piece on the excavation.

Helmut Simon was the next unfortunate victim. He was part of the German tourist group that found the Iceman. Helmut froze to death in an area near the site of the mummy discovery after falling from the mountain.

Yet, the story becomes stranger still. Dieter Warnecke, who led the rescue team sent to find Simon, died of a heart attack on the same day as Simon’s funeral.

Konrad Spindler, who was the first person to inspect the corpse, died of complications of multiple sclerosis after denying the curse’s existence.

The most recent death happened in November of 2005. Dr. Tom Loy, who performed DNA testing on the mummy, died at his home of unknown causes. He was just about to publish a book of his findings.

Is There a Curse?

Some people associated with these deaths, or with the mummy itself, vocally deny the existence of a curse. They say the deaths are easily explained; thus, it’s completely unreasonable to even consider an ancient curse.

Others are more cautious, remaining unsure of its legitimacy.

The threat of a deadly curse doesn’t seem to scare away the almost 300,000 people who visit the Iceman exhibit annually. These visitors have no issue with making the trip to Bolzano, Italy to see Ötzi at the South Tyrol Archaeological Museum.

Would you make a stop to see the mummy, or do you believe in the curse?