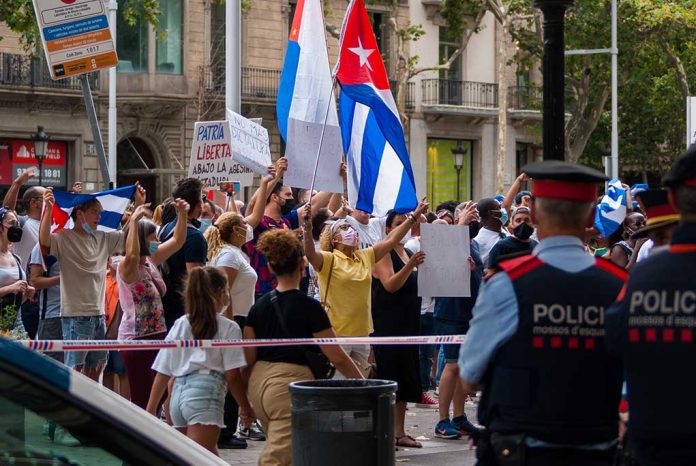 (USNewsBreak.com) – Cuba first erupted into civil unrest in June of 2021. Protesters immediately hit the streets to call for freedom from the suffocating communist government. Cuban leaders reacted fiercely to the outbursts by sending police to subdue the crowds with beatings, pepper spray, and tear gas. Recent reports also indicate that police have arrested more than 100 people in the protests.

Government officials lay the blame for these protests firmly at America’s feet. But is that really an accurate picture of what’s happening? Here are three sides to this developing story.

The Fight for Freedom

Citizens speaking out against the Cuban government say they just want their voices heard. They desire the freedom to talk about what is happening in their country.

The protests were a result of severe economic troubles in the nation. Locals claim horrible government management of the country during the COVID-19 pandemic led to shortages of food, medicine, and other essential supplies. They also say Cuba’s economy is collapsing.

Demonstrators want to be free of the dictatorship they live under and see protests as the only way to get attention.

President Miguel Diaz quickly took to the media to talk down about protesters. He encouraged supporters to confront them and stop them.

Diaz also placed blame for the current conditions in the country on US sanctions. His foreign minister said the US was funding the actions and encouraging them.

Cuba After the Protests

Following arrests that pushed protesters into hiding, the Caribbean nation remains in a state of unease. Government-controlled internet blackouts prevent people from accessing news. Police presence in the streets is excessive. Relatives of those in custody are flocking to police stations to try to get information, but they are walking away not knowing what is happening with their loved ones.

On July 12, President Joe Biden said the US supports the people demonstrating and their right to demand their own freedom. He asked the government not to use violence against its citizens, and suggested listening to what they have to say.

National security adviser Jake Sullivan said the US condemns violence used by the government against the demonstrators. Secretary of State Antony Blinken remarked Cuba’s current state of affairs isn’t a result of US sanctions.

Instead, problems in the country most likely stem from devastation caused by the pandemic and an overly controlling communist regime. Main money sources have been hit hard; this includes the tourism industry. A bad sugar harvest also depleted Cuba’s currency and made it harder for the government to afford imported goods.

How the situation in Cuba might unfold in the future isn’t yet clear. The government isn’t likely to listen to the US, and people have very little impact on what happens moving forward unless they continue to demonstrate and demand freedom.